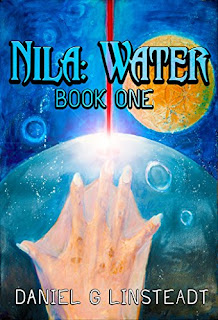 "Nila-Water, the first in a series, emerges as a blend of the parallel realities that Seth lives in. Developing a debilitating illness with an excruciating skin condition, he has lived a life of isolation. He escapes to the bedtime stories told by his father, of a beneficent race of Nila, who live on earth and in the oceans. Suffering also the loss of his father, who abruptly disappears from his life, he becomes attracted to his beautiful, tantalizing caretaker, Kate, who shares the house entrusted to him by his father. They mutually agree he should undergo four risky treatments recommended by his doctor, Eshe, to curb his ailing condition.
The questionable intentions of Seth’s powerful father for humans and for Nila are revealed during the course of treatments. Are Seth’s real-life experiences during the treatments actually his new life in the ocean, or a result of the drug being administered?

This is quite a fantasy/paranormal/supernatural colorful read that will definitely keep your attention as you deb into a little bite of it all from 'fantasy, mystical, mermaid, shifter, psoriasis, illness, arthritis, consciousness, visions and dreams.'  What a enlightening story 'Nila: Water' will take the reader on quite a journey about Seth who lived with a 'debilitating illness having a excruciating skin condition, living in isolation.'  Seth lived to hear bedtime stories told by his father, however, that quickly ends as his father disappears.  But Seth is left with a caretaker [Kate] who takes care of him. What will happen when Kate and his doctor Eshe talk Seth into 'undergoing four risky treatments to help his condition?  Now, this story will take on some 'real life experiences during this treatment' and I will stop here and say to understand what all is happening to Seth with some 'questionable intentions that his father has for humans and the Nila' you will have to pick up 'Nila: Water' to understand what all is going on. Just what is Seth's father trying to do?

"Are Seth’s real-life experiences during the treatments actually his new life in the ocean, or a result of the drug being administered?"  I found this fantasy/paranormal/supernatural story definitely from this author "A unusual medical treatments leads Seth into a heroic role in a mystical life based on his father's bedtime stories of the oceanic Nila race."