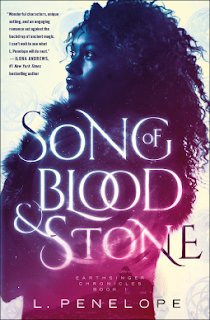 ""Wonderful characters, unique setting, and an engaging romance set against the backdrop of ancient magic. I can't wait to see what L. Penelope will do next."--Ilona Andrews, #1 New York Times bestselling author

L. Penelope's Song of Blood & Stone is a treacherous, thrilling, epic fantasy about an outcast drawn into a war between two powerful rulers.
Orphaned and alone, Jasminda lives in a land where cold whispers of invasion and war linger on the wind. Jasminda herself is an outcast in her homeland of Elsira, where her gift of Earthsong is feared. When ruthless soldiers seek refuge in her isolated cabin, they bring with them a captive--an injured spy who threatens to steal her heart.
Jack's mission behind enemy lines to prove that the Mantle between Elsira and Lagrimar is about to fall nearly cost him his life, but he is saved by the healing Song of a mysterious young woman. Now he must do whatever it takes to save Elsira and its people from the True Father and he needs Jasminda's Earthsong to do it. They escape their vicious captors and together embark on a perilous journey to save Elsira and to uncover the secrets of The Queen Who Sleeps.
Thrust into a hostile society, Jasminda and Jack must rely on one another even as secrets jeopardize their bond. As an ancient evil gains power, Jasminda races to unlock a mystery that promises salvation.
The fates of two nations hang in the balance as Jasminda and Jack must choose between love and duty to fulfill their destinies and end the war."

This was a well written wonderful magical fantasy read with interesting main characters  [Jack & Jasminda], setting[Elsira, which is a land of Silents People], love and oh yes beautiful magic [Earthsong powers]  "Song of Blood & Stone" will definitely a enthralling read that will keep your attention turning the pages to see what was coming next.  Be ready for 'sex scenes, mentions of rape, racism, mystery, action paced, with humanity, love, romance, history, war violence, political drama, adventure and in the end giving one quite a riveting tale' that will keep you captivated in this fantasy world.    It was interesting seeing this unlikely pair Jack & Jasminda who will 'face undue scrutiny due to their different skin colors.'  Now to get more of this story you will have to pick up this read to see how well this author brings it all out and in the end giving the reader a wrapped up thought provoking story.  I did like at the beginning of each chapter there was a quote from collected folktales which went so well with each schapter.