Cry Baby Cry..... or Not by Dewandus Johnson 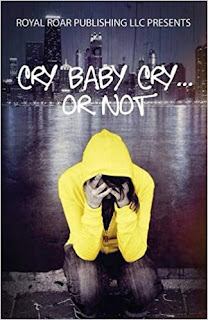 "Trina is a young girl raised by her deaf and mute mother named Jackie. Jackie is so mad at the world because of her curse that she pours unimaginable hate into her daughter. Trina grows in hate until she finally has enough and stands up for herself. She runs away and finds herself subject to a world filled with murder, gangs and extreme violent behavior. Trina knows nothing about the game so all that she learns is by trial and error until she meets Mistro. Mistro, a young gangbanger blessed with royalty in his mob, sees something in Trina that makes him infatuated with her persona. After she witnesses him murder a mark, the question that she asks catches him completely off guard..... (How does it fill to kill someone!?) Unable to shake the first murder he witnesses, a bond is formed in his mind with Trina and he sets out to find her and they find love. Mistro tries to find a flaw within Trina because of his own battles with trust issues and finds that her loyalty is real and untainted. Mistro starts a new hustle and Trina starts to question his love. Tee Tee introduces Trina into her own hustle and all hell brakes loose. Will Mistro understand or will Trina find her own way into a world of selling dreams and orchestrating her own survival."

Title: Cry Baby Cry...or NotAuthor: Dewandus JohnsonPublisher: Royal Roar Publishing Reviewed By: Arlena DeanRating: FiveReview:"Cry Baby Cry...or Not" by Dewandus JohnsonMy Rationalization:I will say this was my first read by this author and all I can say is this story was one that will keep your attention turning the pages to see what was coming next. There was 'never a dull moment from cover to cover.' My heart really went out to the main character Trina with her life spent with her mother Jackie who was born deaf and mute. Then we see as Trina moves on with Mistro and on to many other ones that greatly affected her life in one way or another. By the end of this story I was left still wondering will Trina ever get it all together with the person she was not with? Would Trina listen to what Yentl had told her? I found that this author was able to give the reader a story with the use of 'graphic details and oh yes an intriguing storyline' with lots of drama, twist/turns excitement and loads of action along with much despair. Be ready for quite a 'raw and gritty read' of 'Cry Baby Cry ...or Not' that definitely featured the bad and ugly of the life of Trina. Thank you to the author for the read and my presenting my opinion of the read.
urban life