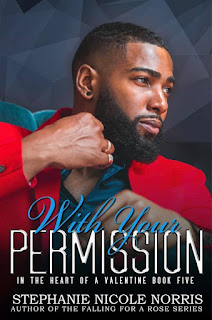 "It was their first encounter that landed them in newfound territory.
Up and coming wedding planner Bri St. James is in the height of her career. As the CEO of Building Bridges LLC, Bri is driven by determination for success, and each day makes for new opportunities abound. However, while planning the wedding of one of Chicago’s hottest couples, Bri’s focus is shifted when the strum of a nocturnal voice captures her attention. Being an empath has empowered her sense of compassion for others, so she’s not only drawn to him because of his broken heart but also from a fierce attraction that sparks her interest and tap dances on a groove on her heart. Getting involved with someone who’s not open to love may prove to be the most difficult road Bri has ever journeyed, but she’s unable to stop herself from falling into an irresistible tango of love.
World-renowned photographer Raphael Valentine hasn’t been in the public eye since the tragic death of his fiancée four years prior. To date, his time is spent helping his charity of choice—educating the community about the dangers of driving while intoxicated. For him, love is a thing of the past until meeting Bri St. James at his brother’s rehearsal dinner made Raphael question what he’d always believed to be true. There was no explanation for the riot of pulsing sensations that ripped through his core when his eyes met hers. The unquenchable heat that followed stirred his soul, sending his heart on a quest he himself hadn’t agreed to venture on. As a friendship between the two flourishes, and they're cloaked in a dynamic surge of desire, Raphael is met with the ultimate challenge: surrender to a second chance at love or abandon his happily ever after for a lifetime."

Title: With Your PermissionAuthor: Stephanie Nicole NorrisPublisher: Love Is A Drug InkSeries: In The Heart Of A Valentine Book 5 Reviewed By: Arlena DeanRating: FiveReview:"With Your Permission" by Stephanie Nicole NorrisMy Rationalization: What an enjoyable read "With Your Permission" was of Raphael and Bri's love story. I loved how this author was able to present another one of her series, In The Heart Of a Valentine" in how both of these two main characters were able to help each other heal. As always this author's love scene is off the chart: HOT! All in all the story will have you on the edge of your seat as you are continually turning the pages to see what was coming next for these two. The reader will be taken through quite a journey of 'grief, friendship, seduction, and in the end love' to a HEA where they were definitely made for one another.