Since I Fell For You By: Bella Andre 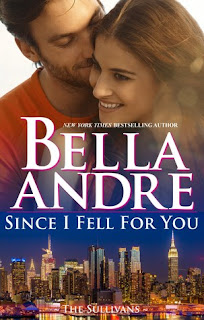 "Suzanne Sullivan doesn't need a bodyguard. After all, she's one of the most successful digital security specialists in the world―so she can most certainly take care of herself despite the problems she's been running into lately. Unfortunately, her three brothers don't agree. So when Mr. Way-Too-Handsome shows up bound and determined to protect her, whether she wants him there or not, sparks definitely start to fly. Because she has absolutely no intention of falling for the bodyguard she never wanted in the first place...

Roman Huson has vowed to do whatever it takes to protect Suzanne Sullivan from harm. And her brothers would kill him for so much as looking at her the wrong way. The only problem is that he's never been hired to work for anyone so beautiful, or brilliant, before. Between trying to keep up with her―and working like hell to keep from kissing her breathless―he's up against the most difficult challenge of his life. Especially when it turns out that the passion, and connection, between them is hotter than anything he's ever known..."

"Since I Fell For You" by Bella Andre

This was a wonderful second in the series of the New York Sullivan's reads. I liked how this author gives the readers one interesting lovable read that featured Suzanne Sullivan and Roman Huson. Would I like to have Roman for my 'bodyguard'  oh well, that's another story but for Suzanne she simply wasn't having it.  What had her brother's [Alex, Harry & Drake] gone behind her back done in order to keep her safe?  Will Roman be able to deal with Suzanne in her not wanting him around? What did Suzanne plan on doing to Roman that would send him running?   What will happen when there is a twist in this story that will have the readers saying yummy with all that chemistry that comes about for these two [Suzanne and Roman]. Will Roman be able to keep Suzanne safe? Do you think that these two Suzanne and Roman finally get a HEA?  Well, to get all of these questions answered and so much more you will have to pick up this wonderful well written series to see how this author brings it out for her readers.  The characters were so very well developed with a entrancing story giving the readers one spectacular read that goes so well with all the other Sullivan reads.  Be ready for some passionate romance, drama, mystery, close family and friends.  Would I recommend? YES!

Thank you to the author for another continuation to a wonderful series!