After Ray: Book 3 of the Until Ray Trilogy Audio by Cheryl Robinson 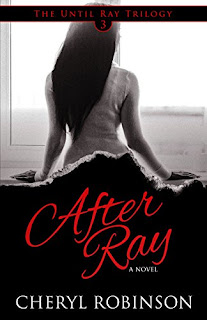 "He left me.
I moved on.
He wants me back.
Does love have an expiration date?
Meet the new Sarita Saint. Everyone changes in three decades, but Sarita’s not at all the same woman that her husband of only one year abandoned. Ray’s back and eager to start over with Sarita, however, her transformation is long since complete.
But one thing hasn’t changed: her need for closure about their brief, failed marriage. Ray Saint is the only person who can give that to her.

After Ray, the third book of the Until Ray trilogy, is told from the perspectives of Sarita Saint, the jilted wife; Raymond Saint, the self-professed changed man; and Boone Sawyer, Ray’s former best friend. Intertwined in this thought-provoking story that embraces middle age, the three explore lost opportunities and uncover layers of deceit as they question what love means."

"After Ray  Book 3" by Cheryl Robinson

I found this last series quite a interesting one where we now find Ray is now trying to get Sarita Saint back.  We have come from Book One,  'Until Ray,' then Book Two, 'Ex-Ray' and now 'After Ray' Book Three where Sarita is wanting answers from Ray into why he left her on their anniversary in the first place.  As I sat and listened to this author's very well done narration of this story I kept wondering why it was so important for Sarita to know the reasons why Ray left her and will Ray be willing to share the truth to why he left?  The story will take on some twist and turns that brought in the death of Sarita's parents of how much she missed her mother and even though she had sisters she wasn't close to them.  After the death of her best friend Sharon her only close friend was Boone Sawyer and now he was her lover.  Now there will be a lots going on that you will have to read or listen to this story to fully understand how we get to the end.  Will Ray be able to give Sarita the answers that she needs so that she would finally get the closure she wanted?  I will say that Sarita did get on my nerves at times in the way she dealt with what was in front of her but in realizing she really didn't have anyone to talk to except Boone and naturally he wasn't for a lots of what was going on in her mind especially when it came to Ray.  I was sorry to see how that friendship ended for Ray and Boone but again not surprise.  It was interesting in how I could see the light finally come on for Ray in knowing that Sarita wasn't well...I will stop here and say you will just have to pick up this good audio read to see how well this author brings it out so well to the reader.  My favorite part was at the end when Sarita was going through Ray's phone and finally she gets the closure she needed.  The only thing I would say about the ending would be I wished there had been a epilogue.  I would have loved to know what happened a year later.

This was a beautiful story that wasn't always happiness at times but definitely having some moments with 'family, heartbreaks and love.'  Thank you to the author for the audio read and my giving my honest opinion of the read.