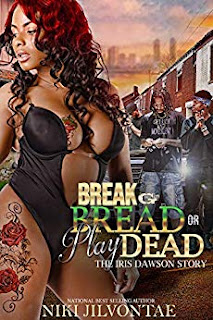 ""A hard head makes a soft a**!" Is a saying many of us have heard before. Usually it's something said when you're being grown and not doing what you KNOW you're supposed to do. This saying is especially true in the case of Iris Dawson. Once a good student from a middle class, two parent home, Iris was destined for greatness. Until she got a taste for fast money and celebrity status. Even if it was just hood fame, Iris wanted it along with power and respect. So she takes on her aunt Tootie's persona and starts finessing men. Her Break Bread or Play Dead motto helps her to achieve top notch hood credibility and a nice little bank roll to match. All of it comes at a cost and Iris finds that out when her world turns upside down. Her actions lead her down a path of lies, betrayal, violence, and murder which eventually turns in to jail time! After she's given 23 years at 18, Iris has to reflect on her life and tell the story of the hood menance known as The Infamous ICE!!"

Title: Break Bread or Play Dead: The Iris Dawson Story
Author: Niki Jilvontae
Publisher: True Glory Publications
Reviewed By: Arlena Dean
Rating: Five
Review:
"Break Bread or Play Dead: The Iris Dawson Story" by Niki Jilvontae
My Thoughts....
This was one of those story that you could see coming as Miss Iris Dawson better know as [ICE] brought it all upon herself. Why was that? Well for one thing she would listen to no one... not her parents or even her best friend. With all of the people Iris had around her from her parents, Tweety [Ashley], Cookie to Jahili [Scoop],ones you would think Iris would have listened to them but no, she liked her aunt Tootie's saying "Break Bread or Play Dead." And that was just what Iris did! We find that she would much rather be involved with dead beats like Jerry, Clarence, Deven, Aunt Tootie and Dreka, which lead to much of her down fall. Yes, karma came for Iris and it was hard in that she ended up being now under arrest for the murder of 'Shantell Wright and her unborn fetus...with more charges of assaults, hit and run and attempted murders pending'. Now, Iris could only think of all she had done and was it worth it? Now as Iris tells her story while there in prison in the end we can now see Iris Dawson, formerly know as Infamous ICE was now serving 23 years in prison. I am truly thinking only if Ms Iris had listened to the right people her life she could have gone quite a different way. Was the cash and ruthless image on the street of Memphis worth it? Wow, a read!