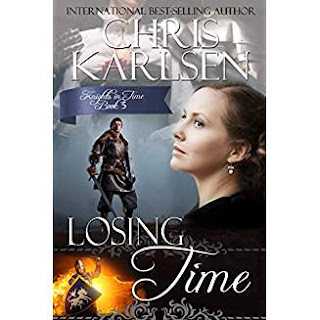 "Can love survive the wrong time and place? Felicia Wycliff's peaceful stroll through the woods turned to disaster when her dachshund bolted after a rabbit. One minute Felicia was running after the determined little dog, the next she was hurled to the ground. Gathering her wits after her tumble, she brushed herself off and continued her pursuit—-right into three mounted knights who blocked her path. They were so authentic looking. They might've stepped from the keep of the nearby castle, Elysian Fields. But the old Norman fortress was a ruin and had been for three hundred years. "Seize her," the middle knight ordered, the knight who sat tallest in the saddle. "Let me go." She fought, striking out when the two knights grabbed her. "Who the deuce are you?" "I'm the Captain of the Baron's Guard, and you are trespassing." Kidnapped, her confusion and fear consumed her. But when they rode through the gates of Elysian Fields, the castle looking as formidable as the date it was built, her terror exploded. When she fell she knew exactly where she was. But where the devil had she landed?"


Title: Losing TimeAuthor: Chris KarlsenPublisher: C.K. Series: Knights in Time Book 5Reviewed By: Arlena DeanRating: FiveReview:"Losing Time" by Chris KarlsenMy Thoughts....This was quite a interesting series...Knight in Time Book 5 'Losing Time' as we find Dr. Felicia Wycliff who had been walking her dog, Chloe ends up in a fairy tale having being captured by a Sir Harry Quarels and his guards and taken to the castle. At this time no one knew that Felicia had fallen through time while she had been searching for her dog. Now Felicia finds herself in 'Wlysian Fields, 1359...in medieval castles crisis. However, trying to explain this to her captors was really taking a toll on her while unknown to her plans were being made for Felicia travel back to her time zone in 2018. This story ended up being quiet one entertaining, romantic and a time travel read that presented some historical background that added some enlightenment to the story. I liked how this author was able to brings Sir Harry and Felicia together giving the reader a interesting read that turns out to be 'lovable and humorous banter' at times. As the story continues by the end will Felicia go back with Harry in 1359 or will Harry stay with her in 2018 as she carries on her career as a Doctor. Will these two be able to stay together being from two different time zones? Well, as they back and forth in time will Felicia and Harry discover the right place it is to be with the one you love? To find all the answers to these questions you will have to pick up 'Losing Time" to see how this story will all come out. If you are into a time travel romance read then I would recommend 'Losing Time' for you as a good read.