I Want You Back by Lorelei James Apr 2 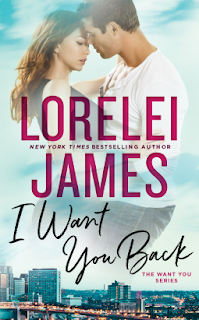 "Former NHL star Jaxson Lund has returned to the Twin Cities, but he's at loose ends, unsure if he belongs at Lund Industries, or where he stands with Lucy, his ex-girlfriend and mother of his daughter, Mimi. Despite the signs she'd like to leave him in the penalty box, the attraction burning between them reinforces his determination to prove that he deserves a second chance...
Lucy Quade is in a good place with a steady job, a nice apartment, and a well-adjusted daughter, which is why she's hesitant when Jax insists on co-parenting. It's not that Lucy doesn't trust Jax...she's just unconvinced he can handle multiple responsibilities when he's been singularly focused on playing hockey. But when issues arise with Mimi, Lucy's shocked at how levelheaded and paternal he acts, giving her a glimpse of the Jax she used to know, the sexy, sweet man she fell for years ago.
Once Lucy lets her guard down, Jax goes all in to show her how good they are together, but will their past remain too large an obstacle to ever overcome?"

Title: I Want You BackAuthor: Lorelei JamesPublisher: BerkleySeries: Want You # 1Reviewed By: Arlena Dean Rating: FourReview:"I Want You Back" by Lorelei JamesMy Rationalization:If you like contemporary romances, second chances and sports[hockey] then I am sure you may love this read which dealt with infidelity, addiction and the consequences of unsafe sex. I found this quite an emotional roller coaster read of Jaxon and Lucy where there will be some secrets that will come out that will get a hold to you like nothing else for this couple. Will there be redemption for these two in the end? I liked how this author gives the reader a story with 'flashbacks and alternating POV to the present.' I did love how Jaxon took responsibility for his actions and did prove he was better now than in his past. In the end, the reader will get a heartwarming story of two people who really loved each other but had lots of baggage to sort through before they would truly be together. Now at this point, I do want to say that Lucy wasn't perfect in that she also had some issues of her own but in the end, they had a daughter Mimi whom they were now co-parenting and did find her quite something to deal with at times. I was glad to see they kept on top of that situation with Mimi. So, the end question for Lucy was could she trust that Jaxon would be there for their daughter? Be ready for some sexy steamy romance and some feisty characters that will definitely keep you turning the pages to see what was coming next. I will say that the story did have some up and downs for me but by the end, I thought it was a good enjoyable read.