Loving a Heartless Felon By Jade Jones and Chase Moore 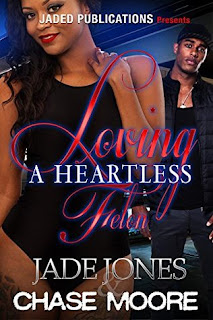 
WARNING! THIS STORY IS NOT FOR THE FAINT AT HEART


"Liberty had been going through the wringer with her crazy ex-girlfriend, Trip. Popping up at her crib uninvited, beating up on her little brother, and driving a car through her house were just a few of the things she experienced since their breakup. Life was miserable before Apollo came out of nowhere and rescued her. He's everything she ever wanted in a partner, and she loves him for building up her self-esteem and providing for her family. Life is perfect, but things suddenly take a turn for the worse after he's arrested for the murder of Trip. Further tension arises once Liberty discovers that Apollo is a contract killer. After he's released, she somehow finds herself trying to convince him not to kill his next target--who's ironically her little cousin's boyfriend.

Shayla never thought she'd fall in love and marry the outlaw her mama warned her about. Regardless of their past differences, she's determined to make it work with Romeo. Can they overcome their many obstacles in spite of enemies lurking in the shadows?

Kendall Rivers is a 23-year old good girl from the suburbs, who's always lived her life on the straight and narrow. However, everything changes the moment she meets head of a ruthless gang known worldwide as The Heartless Felons. Sexy, charming, and swag on a thousand, Quay is every female's dream and every father's worst nightmare. Despite his bad boy reputation, Kendall still finds herself falling head over heels in love. But there's only one problem... Quay is hiding a deep, dark secret that could potentially put their lives in jeopardy. Will this unlikely couple triumph? Or will Quay's reckless ways and dangerous lifestyle lead to their demise?"

"Loving a Heartless Felon" by Jade Jones and Chase Moore

This was quite a interesting read and definitely not for the faint of heart readers!  Wow, what these two authors came up with in this story was some read that will keep your attention all the way to the end.  Characters from ... Shayla, Romeo, Apollo, Liberty, Quay and a few others will give the readers
quite a ride to the very end. Be ready for plenty of drama, revenge with a lots of horrible scenes, murder...but since this is a urban fiction read be ready for it is a fasted paced novel with continual action...violence over the top!  I will say that I did enjoy the ending to this story and I must say these authors presented the readers with a good read of  'Loving a Heartless Felon.'