Seasons of Love By: Andrea Boeshaar 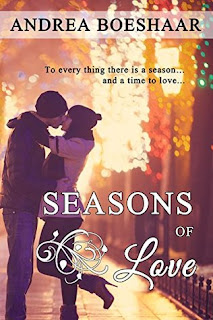 "An Apple a Day

Dr. Brian Coridan needs a break. He vacations in quiet Blossom Lake, Wisconsin where he plans to ponder his future as a physician. He never expects to be distracted by Talia Fountain, the town’s “health food nut.” She’s both charming and annoying and their philosophies about medicine are worlds apart. Then why can’t Brian keep his distance? Could it be she holds the key to what’s been missing in his medical practice?

Krissy and Blaine’s marriage is in its autumn season…or is just over? Life in Milwaukee, Wisconsin has grown dull. Boring. But there’s a handsome, sophisticated new principal at the Christian school where Krissy teaches. Their attraction to each other is undeniable—but is it strong enough for Krissy to call it quits with her frumpy fireman husband?

Everyone in the small Door County, Wisconsin town thought Shari Kretlow and Brenan Sheppard would marry someday—until Shari ran off with another guy. Decades later, Shari is a widow and finds herself stranded in a Wisconsin blizzard on Christmas Eve. The Sheppards open their doors and invite her to stay. But there’s a problem. Dr. Brenan Sheppard, now a missionary in Brazil, is home for the holidays and he’s about to propose marriage to a woman on his missions’ team. But when he sees Shari, long-lost feelings come to light. Can a past romance be resurrected? What’s more, can it survive?"

"Seasons of Love" by Andrea Boeshaar


This author gave the readers three well written interesting Christian short stories of real life.
These are three anthologies...with the first being:  An Apple a Day...How will a health food store owner Talia Fountain deal with Dr. Brian Coridan as he vacations in Blossom Lake, Wisconsin? In the next story...September Sonata.... What will happen as Krissy and Blaine's marriage is put to the test after he is recovering from a fire accident, the twins have left for college in another state and then Krissy is having to deal with a new 'Christian school principal that is showing interest in her?'  Then last we have the last one...Let It Snow...can Shari Kretlow and Dr. Brenan Sheppard be brought back together  after a past romance and be resurrected in a second chance?  All of these questions and more will be answered as you read through 'Season's of Love.'  I think my favorite one was 'September Sonata' because I felt that a lots of women have dealt with similar situations as this.

I did  found all three short stories were a good reads presenting 'love and faith.'  Would I recommend? If you are into a good Christian read...these would be definitely recommended. .

I received a copy through NOR  in exchange for an honest review.