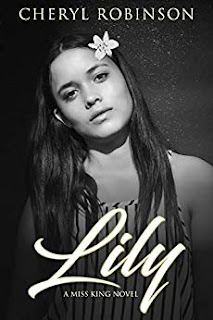 "Ten-year-old Lily King and her mother are being forced from their home in 1952 as part of Detroit’s planned “slum clearance.” With nowhere to go, the prospect of losing her home is just part of Lily’s mistrust of almost everyone, including her bed-bound mother—all 627 pounds of her. Young Lily learns quickly to hate washing each and every inch of that enormous body. She’s full of resentment toward her unloving mother and is searching for a way out.
Two bright spots in Lily’s life are Miss Jackson, a numbers runner who also sells home-cooked dinners, and Miss Jackson’s boyfriend, London “Shorty” Biggs, a self-proclaimed gangster and jazz trombonist with a big heart. While they watch out for Lily, she’s worried that one day they may leave, too, like everyone else who’s been good to her—including her dad.
Spend time with Lily, the first in a series and a decades-long journey of heartbreak, tragedy, and most of all—survival, and get to know how Lily becomes Miss King."

Title: Lily
Author: Cheryl Robinson
Publisher: Rose Colored Books
Series: A Miss King Novel Book 1
Reviewed By: Arlena Dean
Rating: Five
Review:
"Lily" by Cheryl Robinson
My Rationalization...
All I can say about "Lily" is that this is quite a read that will keep your attention until the end. I felt so sorry for all that Lily had to go through in her treatment from someone who was supposed to love and cherish her...but that was not what she got from her mother. I will say Lily's father wasn't too much better but at least he was there for her in the end. Lily seemed to have gotten much comfort from certain people: Miss Jackson, Shorty, and James. It is only too bad they were not around for her in the end. You will just have to read and see how they were there for Lily. I had often wondered why 'Miss King' was the way she was...now from this read one will find out all that this poor person went through during her childhood. Much of the story will simply break your heart with all of the 'heartbreak and tragedy' that happened around Lily in losing someone she loved. I don't want to tell too much of the story but I will say this is quite some read that will only leave you wanting more of how this story will turn out and giving us the true Miss King.
Urban Fiction Read YA read