You Know How To Love Me: Book Three in The Lake Trilogy Kindle Edition by Chicki Brown 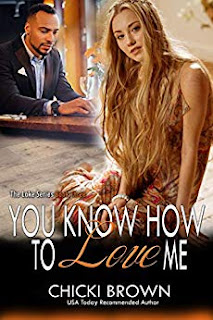 "Chelsea Olson has always been a rebel. Growing up as the daughter of a conservative southern preacher, she never accepted his narrow-minded views, especially those about interracial dating and marriage. In fact, since high school her preference has been black men. But she’s never had a serious relationship with anyone. Then she meets Isaac “Ike” Sloane.
Ike is handsome, successful and family-oriented, everything Chelsea has ever imagined in a man, and she wants him. Will outside forces and attitudes stop them from experiencing the love they have both wanted?"

Title: You Know How To Love MeAuthor: Chicki BrownPublisher: Chicki Brown Series: The Lake Trilogy Book 3Reviewed By: Arlena DeanRating: FiveReview:"You Know How To Love Me" by Chicki BrownMy Thoughts.....This was a good story that featured Chelsea Olson and Isaac 'Ike' Sloane. The story evolves around Chelsea who was white and had been raised by a 'conservative southern preacher' but never would she let that blind her to not only having black friends but to even interracial dating. Having friends who were black was who Chelsea was all about. However, never having 'a serious relationship with anyone' after meeting Ike Sloane who was her boss will that change? The story really plays out very well somewhat predictable at times in the story, however, still a good read. How will 'outside forces and attitudes that Chelsea will experience in this relationship with Ike turn out for her? I enjoyed how this author was able to give the reader some knowledge of how life can be in situations that Chelsea had to face. However, there will also be some things that will be an eye opener for Ike as he too had been through some things also in his life. Will these two be able to make it together as one? Will they both know how to love one another due to the pressure they are in? Well, this is where I say you will have to pick up this good read of "You Know How to Love Me" to see how this author will bring it all out to the reader. I will say I loved the ending of 'The Lake Trilogy' that brings the series all together so very well. If you haven't read this series please do so ...you will enjoy them!