Desiring The Darkness By: Shiela Stewart 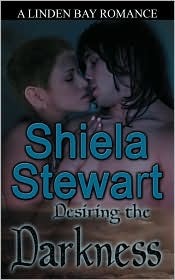 "With the cloak of darkness surrounding Jacob's Cove, Dante Vega must work to protect the humans from the blood-thirsty vampires trying to take over the human race. When a half-naked young woman races into his arms begging him to protect her, he is compelled to help despite the fact that she is a vampire.

Before all hell broke loose, Gypsy Dawn was an average woman carrying on with her ordinary life...until she's turned into a vampire. With no family and no where to go, she clings to Dante. Aside from his dark, mysterious, good looks, she finds herself inexplicably drawn to him. And when his life is threatened she discovers just how protective she has become.

Trying to bring back the sun is not easy, especially when the creature responsible, has gone into hiding. With Dante's long lost brother working with the enemy, one friend is killed and another is taken hostage."

"Desiring The Darkness" by Shiela Stewart

This story continues on from this author first series 'Seducing the Darkness' were when find
Jacob's Cove is now in total darkness due to what has previously gone on.  Will the vampires
succeed in taking over the human race?  The characters...Dante, Gypsy Dawn, Jonah, Ariel. Basis and Trinity....all well developed, well portrayed and simple a well told paranormal read.  Who are
the vampires in the group?  Well with the job that they have before them trying to bring back the
sun that due to Chaos who had gotten the king of the vampires restored to his place only to have
it turn up side down due to Dante and his friends Basil and Trinity. Now with Chaos on the run from them we find them not only in darkness and trying save the people of the cove but Dante has rescued
a Gypsy Dawn and is also looking for his brother Daniel. This story will pick up from here and
will keep your attention till the end due to all of its twist and turns in this story especially with Jonah and Raven. To get it all I would definitely suggest you read this first series first before reading this one due to the fact it will explain so much of what has brought you to this point in the read. In the end will why is Chaos so bent on getting  to Trinity? What plans does Chaos have up his sleeve for Trinity?  Well, I guess to get this and so much more you will have to pick up the author's  next series....Embracing the Darkness to find out.