Saddle Up By: Victoria Vane 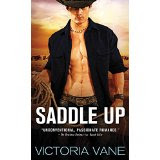 WILD HORSES COULDN'T BRING THEM TOGETHER...
With exceptional talent and looks, cowboy "horse whisperer" Keith Russo once had the world at his feet - until his career was unwittingly destroyed by an aspiring filmmaker. After being rejected by his family for exploiting his Native American heritage, Keith has no choice but to turn back to his humble beginnings as a wild horse wrangler.

BUT MAYBE THEIR PASSION CAN...
Miranda Sutton always dreamed of making films, until wild mustangs captured her heart. But turning her grandmother's Montana ranch into a wild horse sanctuary proves harder than she thought. She needs someone who knows wild horses. Keith and the mustangs need each other. And while working together to save the herd, Keith and Miranda discover a passion as wild as the mustangs they love."

"Saddle Up" by Victoria Vane

Who would have thought that when Miranda Sutton meets Keith Russo while making a documentary about him that they would in the end 'Saddle Up' in the end.  I loved how this author was able to give the reader such a intriguing romantic read that involved a 'half Native American horse whisper and wrangler and a film maker [until she decided to work with mustangs].  It seems like meeting Keith was the best thing that could have happened to Miranda as it was the start of her loving mustangs.  The characterization of not only Miranda and Keith but also Jo-Jo[Miranda's grandmother] was a internal part of this well written story...all being so well developed, defined and believable. As the story continues we will see what will happen as Miranda and Keith's romances will come about, then then go their separate ways only to come back into play after Miranda's grandmother Jo-Jo [Josephine Mirabelle Sutton] 'decides to reinvent her ranch for displaced mustangs' after Miranda shows an interest in wanting to stay there in Wyoming and help with  this venture. Will Miranda get the help she needs from Keith?   Why was Keith so against doing this for Miranda? Why did Keith seemed so lost? What had happened to him in his past that had caused this? I loved Keith's pet name for Miranda which was 'Aiwattsi' that was indeed so beautiful along with its meaning. The reader will see from the read that this author did some well done informational research of these wild horses that  simply giving the reader quite a interesting read that will keep your attentiveness to the end.  Will Miranda and Keith get what they want from each other in the end?  To get  the answers to these questions and many more the reader will have to pick up the wonderful series "Saddle Up' which is a standalone read and see how this story will all turn out. 'Saddle Up' is this author fourth in this series and was definitely one of my favorite series.  Would I recommend? Yes!