Seducing The Darkness By: Shiela Stewart 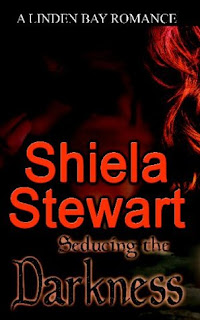 "Cast out by her kind, Trinity Ford has learned to live on her own and not an easy thing to do when you're a vampire.

Trinity was once a fragile girl. Being taken by a powerful vampire prince changed her. Discovering him in the arms of another woman changed destiny. Alone, she's learned fast how to be tough, how to survive, and how to protect the people in her city from the evil that lurks in the dark. She was managing just fine, until Basil walked back into her life.

Basil Hawthorn has been the reigning prince of vampires since banishing his father to the Realm of Dark Mystics decades earlier. When a prophetic dream makes him realize Trinity's life is at risk, he decides the only way to save her is to push her away. Doing so is not easy. Trinity is the only woman he has ever loved, ever will love, and he can't seem to let her go.

When rumors arise of a plan to raise the King and blot out the sun, both Trinity and Basil know they must do everything to stop it. Even if it means working together. Despite the betrayal and the threat, they find themselves drawn to each other. Love has no boundaries, especially in the face of danger. But will they be able to stop the ritual before it's too late?"

"Seducing The Darkness" by Shiela Stewart

"Seducing The Darkness" was a quite a interesting paranormal vampire read Jacob's Cove that did keep my attention to the very end. The story was about Trinity Ford, 19 who had been turned a vampire by Basil Hawthorne who was a vampire prince. The reason for Trinity doing this was because she was all alone after the death of her parents and sister and Basil was their for her.  With Trinity who worked on computers by day and at night she could be found prowling the street trying to keep the humans safe.  Both Trinity and Basil were quite a item until things started happening with Basil that seemed to change in his feelings toward Trinity by pushing her away after they had been together for six years.  What did Basil do  that was so stupid in order to try to accomplish this?  Did it work?  I don't want to tell too much about  the story but it had a lots to do with King Avadur [Basil's father] being  banished to the Realms of Darkness due to the fact that he had deserted the queen mother by locking her behind the Realms of Mystics. Now it seems like Basil is having 'dreams of Trinity's life being at risk'...[someone he loved] because he had banished his father [King Avadur]. So, Basil knew that if what all was going on in Jacob's Cove with his father and  his second in command, Chaos, in charge who wanted  King Avadur freed so that he may rule at his side....then the world was in danger of becoming dark and he had to try to do something to prevent that from happening. What all will Basil do in order to try to keep Chaos from getting his father freed?  How would he be able to protect Trinity whom he was so in love with ...other than trying to put a distance between them so Trinity would get harmed.  Did it work? What was going on with the humans in Jacob's Cove 2025 by the hands of the vampires that  put them in such danger?   What was Trinity into with an investigator [Dante] who was looking for  the missing girl and his brother? What will happen as Trinity and Basil work together to try to stop the plan to raise the king and stop the sun from being blotted out?  To get all of these questions answered and so much more you will have to pick up the good read to see how well this author presents this novel to the readers.

The story will move fast as the readers will find the characters all well developed, defined and portrayed giving one a well told story.  Look out for some real heavy sexy scenes.  However, all in all this was a good read that will definitely have you wanting the next series...Desiring the Darkness.