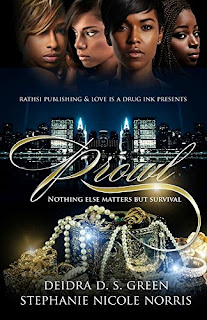 "Brooklyn, Drew, Symone, and Leah grew up the best of friends. Their parents co-own and operate Patterson Pharmaceutical Company, a thriving business that has continuously grown over the last ten years. But after the economy took a hard turn, the family business suffered significant losses, leaving the family’s income on pins and needles. To make matters worse, the property the Patterson’s inherited from their late grandparents is up for auction from missed payments the family was not aware they’d missed. With the family’s debt growing and relationships being tested, the four friends decide to take drastic measures to get the funds needed to secure generational survival. Being high-end thieves was not something they agreed on overnight. Taking from the less fortunate they couldn’t stomach, But stealing from those who already had plenty might just save the family from ruin."

What a interesting mystery thriller and suspense read that these two authors gives the readers.  It is definitely one of those stories that you will not want to put down because there is so much going on keeping ones attention.  The whole idea of this story was off the chart being well written involving 'stealing a salt shaker' but only to find out that wouldn't be the end of these four ladies problems.  Not only that but we find that the FBI maybe on them too.  Then the story will get into some twist and turns that will only  leave the reader to a cliff hanger.  So, we will be left wanting to know what has happened to ...!  Well, the reader will have to get Book 2 in "Prowl [Nothing Else Matters But Survival]" to learn what is going on with Brooklyn, Drew, Symone and Leah.