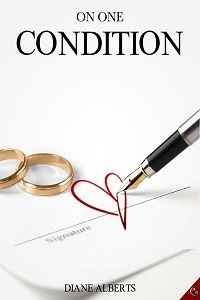 
"On One Condition" by Diane Alberts was indeed a entertaining contemporary romantic quick  read about a marriage of convenience.  Starting with the "morning  after the night before,"....which turns  be very somewhat funny on just how these two people met and then this novel takes off from that... with Johanna Thomas who was a kindergarten  elementary
teacher that  hated Valentine's Day.  Why was this?   Well, Johanna  hated being alone watching other couples being so in love...and even worse was the annual charity auction held at her school for all the singles to have to go through... this being her third time!  Now she meets this British Lord, Viscount Damon Haymes.... had she met him before? ... and OMG what  happen? ...Damon proposals to her.....they marry and live  happy ever after ...well .. you will find out from your reading just how Johanna's ex (Tim)  and Damon's ex(Cecile)  or ? always  seemed to turn up.   How will things turn out between Damon and Johanna? Now, this is the point of time where I say you must pick up "On One Condition" to  find out what one condition is  going on with  these two people: Johanna and Damon.

The characters that the author presents are really very interesting people....Johanna,
Viscount  Damon Haymes, Jeff, Tim, Cecile, Mr. Johnson and Sara. Each one really made
this read exciting in their  form of their words that was absorbed by the reader.

"On One Condition" was a real cute quick read of the..."old story of a marriage of convenience that lead to true love."  This was definitely a novel that would keep you wanting to know what was going to happen next. If you are in for a interesting heroine, lots of laughs, adventure, and a quick romantic read... I would recommend ..."On One Condition" novel  for you.