Meant To Be Mine By: Lisa Marie Perry 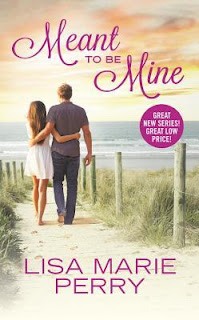 Sofia Mercer may have been sick as a teen, but she’s no delicate flower. And she’s proven it by making it on her own and starting a new life away from the town that turned against her, away from the boy who broke her already fragile heart. But when her aunt Luz dies unexpectedly, leaving Sofia with a mountain of regrets and the keys to a quirky boutique, Sofia has no choice but to return to Cape Cod. Only, this new life in her old town comes with complications.

Burke Wolf was Sofia’s first love—a relationship that burned bright and went up in flames. Seeing him again, Sofia can’t help but get caught up in that all-too-familiar tornado of passion and pain. He’s battled his own demons—that much is clear. But Sofia can’t afford to be careless with her heart . . . and loving Burke again might just break it completely."

"Meant To Be Mine" by Lisa Marie Perry

This first series of Guilty Pleasures...."Meant To Be Mine" was a wonderful read with its beautiful setting in Eaves, Massachusetts.   The story was a sweet contemporary romance story that featured Sofia Mercer and Burke Wolf who had been childhood friends. I found the story will start with Sofia being at her Aunt Luz's funeral that will take you to the end giving the reader quite a interesting story where there will be a lots of  'secrets of the past, feelings, fears  along  with some self discovery, redemption, forgiveness and love' that will come out.

We find that Eaves wasn't a new place for Sofia for she had grew up there with her parents, Aunt Luz and her friend Burke. However, Sofia a been a sickly child that dealt with heart problems and suddenly she [at 17] and her father had moved leaving Eaves far behind [due to be run out of town].   Now, [at 31] she had lived in NY with her best friend Josie and it was after funeral  Sofia learns that she was her Aunt's beneficiary getting [her Aunt's 'erotic novelty boutique'  & her dog named Tish]and left with a decision to make in what to do .... live in NY or Eaves, Cape Cod?  As the story continues Sofia has come into contact with her old friend Burke but were they still friends after what had happened in the end when she had left Eaves?  This interesting and compelling story really keeps on moving and we learn a lots of what all had happened previously in this emotional story where truly Sofia and Burke had gone through quite a lot in their life as children there in Eaves.  Be ready for a little bit of from laughter and happiness, fighting and even some 'crazy hot sex' that will be all in this captivating read.

This author really knows how to keep the readers attention turning the pages as we will see how
love was so hard for these two people. Feeling the love that Burke had for Sofia was off the chart. Seeing how much he went through ....all of the pain...well I will stop here so I won't spoil it for you. It was indeed a good read of how we see the characters,,,Sofia, Burke along with [Caro, Joss, Bautista] to name a few secondary characters were able to come together and help each other when it was needed, being well portrayed and even believable giving the readers one heck of a good read. Will these two get a new start in life  and love as their second chance comes together with all of its twist and turns after their past?

You definitely have to pick up this heart warming novel... 'Meant To Be Mine' to see if these two Sofia and Burke will get their HEA?   Would I recommend?

I will be definitely looking forward to reading
the second book!

This ARC was given by the publisher and NetGallery in exchange for a honest and unbiased review.