The Things We Wish Were True B: Marybeth Mayhew Whalen 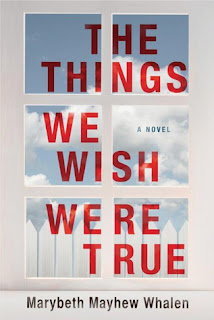 "In an idyllic small-town neighborhood, a near tragedy triggers a series of dark revelations.
From the outside, Sycamore Glen, North Carolina, might look like the perfect all-American neighborhood. But behind the white picket fences lies a web of secrets that reach from house to house.
Up and down the streets, neighbors quietly bear the weight of their own pasts—until an accident at the community pool upsets the delicate equilibrium. And when tragic circumstances compel a woman to return to Sycamore Glen after years of self-imposed banishment, the tangle of the neighbors’ intertwined lives begins to unravel.
During the course of a sweltering summer, long-buried secrets are revealed, and the neighbors learn that it’s impossible to really know those closest to us. But is it impossible to love and forgive them?"

"The Things We Wish Were True" by Marybeth Mayhew Whalen

The small town of  Sycamore Glen, North Carolina was interesting in how this author gives the readers a alternated told stories  that were narrated by a group of characters [with each one with a story of their own to tell] that told a little bit of it all as the reader reads from chapter to chapter and even being told from multiple viewpoints. Was this like  a little bit of  'where everyone knows everyone's business?'

What was most interesting was as the reader read through  the chapters there would be many 'small town twisted secrets and even some lies' that would seemed to be hidden.   Did it seemed like everyone had some kind of secret? Will these long buried secrets come out?  What about the saying 'The truth will set you free.' The main meeting place during this summer in Sycamore and where one would find the locals  daily at the pool that was being greatly used.  What will happen after there is a tragedy almost occurs?  How will this affect this small community? To find out the answers to many questions the reader will have to pick up this read to see how this author will bring it all out to the reader.   Be ready for a read with a good plot even though somewhat predictable with lots of drama, little mystery and even with a few flawed characters.   Some of the most memorable characters were Cailey, Zell and Lance. Jency, Bryte and Everett with each being well developed, portrayed and even believable.  One of my favorite parts of of the read was when  the 'Miracle tree' and the reason it was given.

I liked how this author brought out the story and by the  end of this read it showed some positive changes, with joys along with 'redemption,'   Also, I liked some of the book club discussions questions at the back of the novel.