Pregnant By My Mother's Rapist 2 By: Niki Julvontae 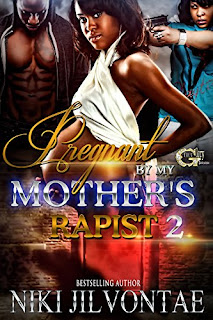 "Months after she found out her mother's rapist was her father as well the father or her child, Kaniyah aka Na Na is still in shock and about to lose her mind. Drama finds it's way back to her though when Kenan refuses to give up. Hell bent on getting Na to conform with his program, Kenan begins to stalk Na Na just like he did her mother Spicy. The only difference is Na is her mother's child and teetering on the brink of insanity so she makes Kenan's mission damn near impossible. That doesn't stop tragedy from finding her though because soon her brothers began to get picked off one by one. That leaves Na in a fragile state emotionally with no one around to help protect her daughter. Eventually all of the pain weighs heavy on her and she finds herself locked behind the walls of a mental hospital with only one mission on her mind, Kill Kenan. Will Na ever get out and ensure her daughter is safe? Will she finally get revenge on the evil bastard who changed her life forever? Come on this drama filled thrill ride and find out how Na got her revenge on Her Mother's Rapist!"

"Pregnant By My Mother's Rapist 2" by Niki Jilvontae

This is the second part of this read that will keep your attention as this author gives the reader quite a active read.  Will things ever be OK for Na Na as long as that Kenan is still around bringing much havoc to her life?  It seems like this guy is always several steps ahead of her...how can this be?  Who
is sharing information with Kenan?  Well, I guess as we are left wandering what will happen next there will have to pick up the the next series where I am more than sure there will be more craziness as the reader will hopefully find out who, what, how and where to rest this well told story.
urban fiction