Bound for Temptation by Tess LeSue 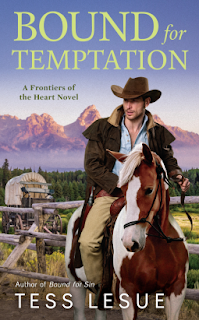 "Having survived the Oregon Trail, Emma Palmer is ready for a fresh start, even if it costs her all the gold in California.
Emma Palmer has had many jobs and has gone by even more names, but most recently she is known as Seline, madam of her own establishment. Her place is clean, her booze is cheap and her bedrooms are fancy. But when a would-be patron won’t take no for an answer, she is forced to don a new disguise and flee for her life. While the schemes she cooks up might seem outrageous to an outsider, they haven’t failed her yet.
Tom Slater is a taciturn cattleman at the tail end of a long, hard season on the trail. He’s looking forward to a quiet winter at his old family homestead in Mexico. What he doesn’t plan on is escorting a group of

n the run to safety south of the border. Tom doesn’t need to be a trailsman to know that the woman with the sly, green eyes—the one he can’t keep out of his thoughts—will only lead to trouble."

Title: Bound For TemptationAuthor: Tess LeSuePublisher: Berkley Publishing GroupSeries: Frontiers of the Heart # 3Reviewed By: Arlena DeanRating: FourReview:"Bound For Temptation" by Tess LeSueMy Thoughts....The author really has a good way of relaying a good story to the reader with great style and with some interesting characters. The two main characters were good with both being 'on the run' from California to Mexico. We have Tom being on the run due to having feelings for his brother's wife and Emma who was running from her past of being a madam at a house of ill repute by a bully. Even though this is a rather good romantic read it will keep you laughing from some of the bantering that is going on in the read especially the part where Emma disguising herself as a nun. I will say that Emma really was a lively one who really knew how to cook up some crazy ideas that will have you laughing out loud. I liked how the story turns somewhat and these two will start to have feelings for one another. With both Tom and Emma having people on their tail they find they will only make it out of this mess by helping and trusting each other in order to stay alive on this journey where we find Tom being considered a 'sweet guy' with Emma being 'charming and mischievous.' By the end this story turns out being a good western romance. Will these two finally get their HEA? Well, you will have to pick up "Bound for Temptation" to see how this author brings this enjoyable romance out to the reader. I was given a complimentary Netgalley and Berkley Publishing a ebook of the book to read and review.