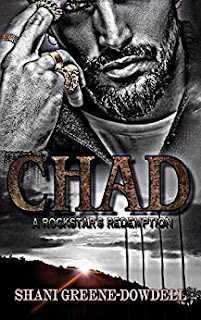 "Chad Dream is a super playboy with a steaming sex appeal. Ladies love him and men envy him. A wealthy rock star, he is known for his magical fingers on his guitar strings and his melodious voice. Linked to several sex scandals, Chad has sworn several times on TV never to settle down even ‘til his last breath. He has said it so many times, his life as a single man is as much as one of his trademarks as his guitar.
Tiana Hendricks, Chad’s best friend, is the only woman he ever loved. She walked away with his heart after graduation. She, however, had a reason, a secret. Her father is one of the most hated men in the USA. Getting involved with Chad would only bring her past back into the tabloids, and she dreads the exposure. But when Chad walks into their class reunion, just one look and she knows she can’t resist their connection.
Chad and Tiana secretly want to be together. However, Tiana is not willing to let all he has worked for go down the drain. They can be together, but no one can know. Once a nosy journalist exposes their new love affair, and Chad reverts to his old media tactics, their world is turned upside down, once again. Will Tiana walk out of his life for good this time? Or will their love prove stronger than any obstacle they may face? "

Title: Chad: A Rockstar's Redemption
Author: Shani Greene-Dowdell
Publisher: Imperial Publishing House
Reviewed By: Arlena Dean
Rating: Five
Review:
"Chad: A Rockstar's Redemption" by Shani Greene-Dowdell
My Thoughts...
I really enjoyed reading about Chad and Tian's sweet romance. This was a beautiful well told 'story of a love rekindled in the midst of exploits from the media.' It was wonderful seeing how these two were able to 'rise above other people's opinions, redeem themselves' where their 'love proved to be much stronger than any obstacle they faced.'