A Dozen Truths: 12 Works Of Fiction By: 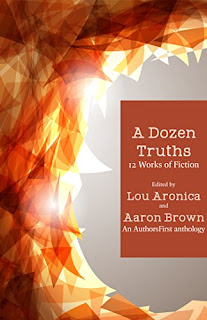 "The greatest truths are often revealed in fiction, as exemplified by this stunning anthology of stories that reveal the human condition in bracingly truthful ways. The eternal complexities of sibling relationships are revealed in four-time #1 bestselling author Steven Manchester's "Lost." The hope and betrayal that so often underlies love declare themselves in Marcia Gloster's "Losing Will." The reality behind a con man's illusions emerge in Craig Ham's contest-winning "Tonic and Spirits." These are three of the dozen truths that will rise from these pages. Side by side with the work of national bestselling novelists like Mary Marcus and Earl Javorsky, A DOZEN TRUTHS features the three winners of the 2016 Authors First Short Story Contest, providing a bold mix of experienced storytelling and fresh new voices. As entertaining as it is engaging, A DOZEN TRUTHS promises twelve dramatic revelations - and as many powerful reading experiences. CONTRIBUTORS INCLUDE: Eric Andersson Steven Manchester Carmen Siegers Marcia Gloster Craig Ham Lynn Voedisch Mary Marcus Christopher Slater KJ Steele Earl Javorsky Roger Bagg Robert Herzog"

As entertaining as it is engaging, A DOZEN TRUTHS promises twelve dramatic revelations – and as many powerful reading experiences.

Eric Andersson:  'Join' ...With the character of Kyle and his ruminations on the universality of mortality.

Steven Manchester: 'Lost' was a short story set in the world of his novel, Ashes. Giving the reader to think are we really lost?

Carmen Siegers: 'Ollie'  the cat was missing...and the family had to leave without him.  Would Allie be found? What was going on with the parents...divorcing?  Later as a called came...Ollie had been found and was being brought home.

Marcia Gloster:  'Losing Will' was about "an overconfident and arrogant publisher seduces his loyal and adoring secretary and with little regard for her or the woman he intends to marry, expects to have her at his beck and call."  Was just a secret in his life?  After working for him for 5 years...will this relationship happened?  Well, I will stop here and say this was quite some read!

Craig Ham: 'Sonic and Spirits' a disillusioned medicine peddler with a traveling museum struggles with is own humanity after concocting a plan to make some easy money in a town terrorized by ghosts.'

Lynn Voedich: 'Rune Lore' What happens when Annabritta Hogland becomes pregnant and a visit to her cousin Ragnar Nordie meeting?

Mary Marcus: 'Cut to the Cross'     'nasty mean stories and Stanley is the most awful of them all.'

Christopher Slater: 'Hide-and-Seek'   ...who will win out of this...Pup or Wallace?

KJ Steele:  'Two O'Clock Train' ...Mara and Jimmy...playing and then the unthinkable happens...

Earl Javorsky:  'Howard and Pablo' ....'is a traditional short story that pits the industrialist Howard Hughes against the musician Pablo Casals.'

Roger Bagg: 'Zec' ...What will happen to him?  Will he be saved?
and last...
Robert Herzog:  'Twenty-Seventh Street' ...Twenty-seventh to Fifth was the way to go!

I found these short anthologies were rather enjoyable read giving a sample of each of these 12 fictional writers which included their bio's,  My favorite anthology comes from Lost, which came from the car trip taken by the Prendergast brothers in 'Ashes' by Author Steven Manchester.  Many of these authors I hadn't heard of that will definitely keep the readers attention especially some of those sci-fi, horror and thriller reads.

I felt that 'A Dozen Truths' was definitely a wonderful way at getting to know and meet new authors!