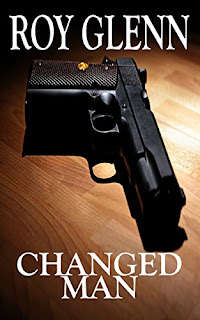 "In Hostile Takeover, Mike Black returned to his past to tell you more of the story that you only thought you knew. That story continues in Changed Man.
After the tragic death of his long-time friend Vickie Payne, Mike Black experiences his own stages of grief: shock, anger, guilt; but mostly he felt pain. Pain because he felt responsible for her death. Black deals with it by killing just about everybody that Andre sends him to collect from. His killing spree has the unfortunate effect of bringing the police deeper into his world, and into Andre’s drug business. Concerned that he is attracting too much unnecessary attention, Andre sends Black away; and at Wanda’s urging, he goes to the Bahamas.
That time away from the city gives Black an opportunity to look at the man he is—and see the man he wants to be in the future. He resolves himself that he needs to be like the ocean: the perfect blend of strength, power, and calm. A quiet and peaceful man, but have the potential to be extremely destructive when necessary. He returns to New York a new Mike Black, but finds that he is faced with the same old problems: business associates murdered, a takeover threat from an unexpected source, tricky women with mad game and Detective Kirkland, who is intent on putting Mike Black in jail for murder."

I loved how this story focused on Mike Black's realizing that he needed a change in his life especially after he goes on a killing spree after the death of one of his own due to his carelessness.  It was on a trip...vacation to the islands where he learns and starts to enjoy what peace and relaxation on the beach could bring him and letting him realize just how reckless he had been working with rage and mostly not with a said plan.  Mike Black realizing he needed a change in his life [stopping with all the rage and anger] and having Wanda by his side helping him with organizing intelligently the  'Mike Black Family business would definitely be a plus along with as always Bobby Ray, Mike's brother being at his side.  I liked how this author was able to give the reader the vulnerable side of Mike Black all wrapped up in such a interesting package and becoming a 'Changed Man.'