Falling for the Best Man Kindle Edition by Joanne Dannon 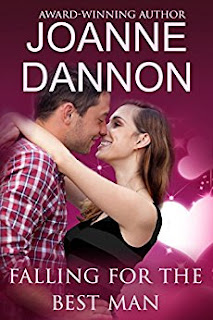 "When the love of his life is his brother’s bride-to-be…
It was love at first sight when app developer Jonah Randall met Kaylah, but he’s crushed when he discovers she’s already dating his brother. When he’s asked to be the best man at their wedding, should he speak up or forever hold his peace?
Lifestyle hacker Kaylah Westwood’s engagement brings her a step closer to the kind of life she’s dreamed of, full of love and family. Her fiancé is a good guy. It’s a shame it’s his brother who makes her pulse skittle.
Jonah would never betray the brother who’s always been there for him. With just two days to go before the wedding, can he let the woman he loves marry his brother? But when Jonah confesses his feelings to Kaylah, a mind-blowing kiss has her rethinking her commitment. She thought she’d fallen for the right man. But is he the best man for her?"

"Falling for the Best Man" by Joanne Dannon

"Falling for the Best Man" was indeed a beautiful well written story of Kaylah and Johan.  This was definitely a good read of Johan after all was said and done will he be able to  finally  get a "second chance at life and a second chance at this girl?"  Who would have known this would happen after Jonah meets Kaylah at a Valentine's mixer?  Why did Jonah's near death experience make him feel that Kaylah was the one for him?  What happens when Johan finds out that Kaylah is dating his brother Felix?

Now, there will be many twist and turns before certain things will happen so you will just have to pick up the novel to see how well this author brings it all out to the reader and all of the above questions will be answered.  Be ready for a read with lots drama and emotions all over the place with some interesting characters.  However, I wish there  had been a little more communication between the two brothers [Felix & Johan].  I would have really liked to know their true feelings about this matter.   However, by the end  the reader gets a good story that will put a smile on your face knowing that the right person got his "second chance at life and a second chance at the  girl making him one of the luckiest guys in the whole world."