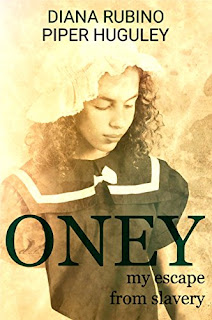 "It is 1793 – a decade after General George Washington led America to victory in its fight for independence from Britain.
With freedom secured, the general has been persuaded to accept a second term as president of the new nation. But in his heart he wants to go back to being a farmer. And being a farmer means he has slaves. Leading a nation is a demanding and often lonely business and Lady Washington is unable to persuade her husband to give up his public ‘duty’.
At least she has help. Oney Judge is her ‘personal servant’ – and soon-to-be confidante. Oney is a ‘quadroon’ – three parts white and one part black. So, unlike the white people who so recently gained their independence from the Mother Country, Oney is not free. She is Lady Washington’s inherited property, though the word ‘slave’ is never spoken. Oney works in “the big house” at Mount Vernon, sewing dresses and serving tea. Lady Washington treats her as well as her own grandchildren. But though she is often mistaken as a Washington relative by visitors, Oney remains in bondage.
In the spring of 1796, Lady Washington tells Oney that she will make her granddaughter Eliza a nice wedding gift. Oney soon discovers this does not mean sewing a negligee or a quilt for a gift. No, it means that she will be the gift.
This is the day that Oney decides to escape – to put her forced bondage behind her and make her bid for freedom. On May 21, 1796, Oney walks straight past the Washingtons and out the front door. Although they make several attempts to capture her, she lives the rest of her life in freedom.
Diana Rubino’s Oney: My Escape From Slavery is a painstakingly re-imagined account of a true and painful story told generations on. At its heart is the paradox of liberty – for an individual, for a race, for a nation. In a modern world where cultures and histories collide, it is a timely reminder of perspectives on ‘slavery’ and ‘freedom’ that we may have become blind to. It is a big, strong, uplifting book with a soul.
Diana Rubino specialises in historical romance, sometimes with a touch of the paranormal, her favourite areas being Medieval and Renaissance England and all American history. A longtime member of Romance Writers of America, the Richard III Society, and the Aaron Burr Association, she recently completed a romantic thriller about Alexander Hamilton and biographical novels about Eliza Jumel Burr and Nathaniel Hawthorne’s wife Sophia.
Piper G Huguley is a two-time Golden Heart® finalist and is the author of Migrations of the Heart, a three-book series of historical romances set in the early 20th century featuring African American characters. Huguley is also the author of the Home to Milford College series. Her new series Born to Win Men starts with A Champion’s Heart, which was named by Sarah MacLean of The Washington Post as a best romance novel selection for December 2016."

"Oney: My Escape From Slavery" by Diana Rubino & Piper Huguley


This story will leave one with so many emotions in this well told historical fiction story about Oney.  These two authors really give  the readers quite a read [escaping from slavery]  where you will see good times and also horrible times that happened around Oney Judge as she seeks her freedom from a most powerful family of the United States. "Oney" is definitely one of those reads that will give you a lot to ponder over long after the read. I will also say this is one of those stories that you will have to be ready for because there is a little bit of it all as one can imagine from the title of the novel "Oney: My Escape From Slavery."