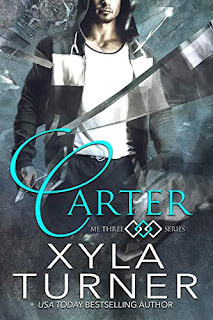 "Carter Strong
So, I yell at referees because they tend to act like blind bats half of the time. I'm passionate, sure, but this new referee has the audacity to throw me out of my own damn game. Who the f*ck does she think she is?
I own this league.
I could own her if I wanted.
Sasha Chapman
My transfer to a new league was the perfect move for my career. Until I met, Coach Strong, the abrasive asshole who yelled at me and accused me of having my ponytail too tight to see. He had it coming. I didn't mean for the media to go on a rampage about him, but when he accused me of being attracted to him, that was the last straw.
I needed to get away from him.
But he wouldn't let me. "

I enjoyed this story of "Carter" that dealt with Carter and Sasha's relationship.  It was good to see them finally coming together and communicating which started them wanting to be together.  With Carter knowing what he wanted after meeting Sasha will be interesting in the way the story brings them together.  I loved both of the parents of these two that really added to the story that will definitely keep a smile of your face as you are reading through the story.  And let's also say that two friends [Zora & Harvey] really were there to help Carter and Sasha better understand each other.  As we see Carter being a sexy alpha and dedicated coach how will he be able to take on Sasha who was a basketball official, a sexy but definitely not one to take any bull from anyone especially Carter? What will happen when Sasha Chambers kicks Coach Carter Roman Strong out of not only one game but two?  It will be definitely interesting seeing him chase Sasha and knowing she was the one for him.  How will this all come out for Sasha and Carter?  Well, you will have to pick up 'Carter' to see how well this author brings it all out to the reader.  The ending of the story was wonderful seeing this dynamic powerhouse couple getting there HEA.  This was definitely a good read!