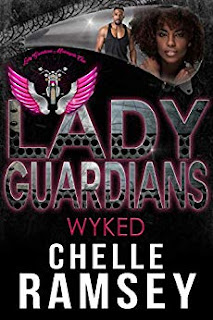 "Romance columnist, Bristol Collins wants to heal her broken relationship with her fiancé, Joe after the loss of their daughter Camden. When she discovers treachery in her inner circle, she seeks solace in her professional life. Longing for more, she discovers within herself a secret passion to join The Lady Guardians, a strong, independent female motorcycle club. On her quest, she meets Rogue and one passionate night leads to more, and her search for freedom unlocks secrets in her life and his.
Firefighter, Maxwell “Rogue” Emerson loves his bike and his music, but lately, he's wanted one thing. One night with the beautiful but broken-hearted vixen named Wyked, has him wanting more than he’s allowed himself to dream of in the last five years.

When Wyked and Rogue join forces his love frees her to explore the woman she wants to be and uncover the woman she is destined to become. Will their love be strong enough to give her the healing she desires, even after she learns the truth about Rogue?"

What a good read I found that 'Wyked' was featuring 'Wyked [ Bristol] and Rogue [Emerson].'  We find that these two people had some secrets that had to be worked out. before they could get to the HEA point.  I found this a very interesting read that could be related to one's everyday life.

she desires, even after she learns the truth about Rogue?
women's fiction