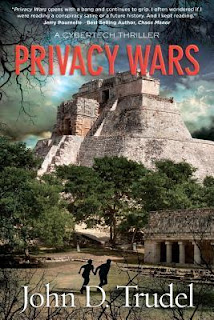 "The 21st Century sees a return of the totalitarian horrors that once caused genocide and World War. Big Brother is ascendant, aided by technology. Everyone is watched. Liberty has been traded for safety and both are lost. Personal privacy has been stolen and must be recovered.

When John is abducted and presumed dead, Cybertech is attacked from all sides. Will stands alone, tortured by remorse and falsely accused. With all he loves at risk, he runs for safety, fleeing wrongful charges, and relentlessly pursued by UN paramilitary forces.

A former student REBECCA RIDER is sent to get him to shelter. She rescues him in the high mountains. Their main allies are the Yakuza and her friends, an ancient cult that possesses advanced science. Both groups seek Cybertech’s technology. How can either be trusted?

Can Will find redemption? Can he and Becky save Cybertech and prevent his technology from being stolen? Can liberty survive? That’s the story, a Hero’s Journey framed against a background of exotic locations, edgy science, societal challenges, and Global Governance."

As I was reading "Privacy Wars" I thought of how this in many ways could have be a non-fiction read with it's realistic plot and then we get some sci-fi of a well written story.  We find from this story that '"Privacy" is a thing of the past and now we have what is happening in the future and offering much 'hope to return to a limited government  and also personal freedom.'   This read is full with some romance, drama, politics, loyalty, wist and turns and fast packed action with a 'Cybertech' thriller ride that will keep your attention till the end. In the end, this author really gives the reader quite a tale that may be considered so very close to reality that will be very thought provoking read.