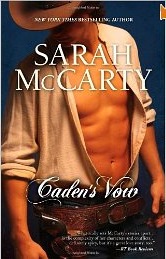 "Caden's Vow" by Sarah McCarty was this authors' 6 in the series..Hell's Eight
# 6.  This novel was a good western, historical, erotica romance that is all rolled
up into one good novel.  I found this series just a love story of Maddie and Caden.Both of these two people were 'broken human beings, one very obviously needing restoration and healing after years of sexual abuse since the age of eight."  "She was rescued in one of the previous books and brought to live with the Hell's Eight and their wives."

Caden had some serious wounds of finding out just who he really was and who
he wanted to be on "set on fullfilling a promise to his father, going to the gold mine." So, what will come of Maddie and Caden?  This is where I say you must picke up "Caden's Vow" to see how this will come out in this forced marriage.
Be ready for the 'wild wild west, gold mines, riding horses, and shootings.'

Many of the characters have come back into this novel from past series runs.
You will find all of the characters so very well developed and very much so capivating only to give you a good read.  This author has some writing style that shows how she is able to creative such a historicical western  manuscript for her readers even giving you the smells along with the experience of this life.

If you are in for a good western, historical and romantic read with some erotica "Caden's Vow' would be recommended to you as a excellent read.