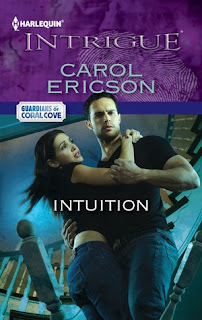 
"Intuition" by Carol Ericson was the third book in the 'Miniseries' ...Guardians of Coral Cove. This author did a wonderful job at keeping this a romantic suspense mystery till the very end. We find that Kylie Grant is back in Coral Cove for two main reasons...one to find out more on her mom's sucide in the COLUMBELLA HOUSE and with her being a psychic(having the 'sixth sense') she had been hired by the mother to find Bree who had disappeared three years ago, disappearing after attending a rock festival. Matt Connor who is now a P.I. returns to his hometown and this is his first case had also been hired by Bree's father to work on this missing case. A lots is going on in this story. Someone keep trying to stop Kylie from seeing what has happen to Bree. It seems like Matt who was a classmate, bad boy and tough guy on a motorcyle was now trying to stop whoever it was from harming Kylie...he had already saved Kylie when he showed up at the old mansion and rescues her. After they find out they are working on the same case they decide to work together and what a list of suspects that they did came up with. Will they find Bree before another 'Rock Festival' comes to town? Will there be some tension between these two people that will become romantic? This is where I say you must pick up "Intuition" to see how the author will bring this mystery out to the reader.

I found "Intuition" very engaging and hard to put down until the very end. This faced paced and action pack keeping you wondering who, what, why and where did it happen and finally case solved.

If you are in for a interesting suspenceful fast paced read...."Inituition" would be recommended to you.