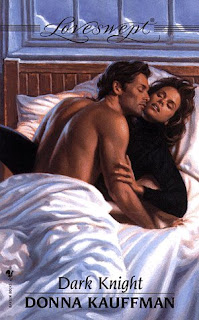 "Dark Knight" by Donna Kauffman was indeed a good romantic suspense contemporary read.  It was the fourth series in conclusing to this series.  This novel was another one of her well written novels that you will find yourself being pulled into this fast read especially in the cabin scenes, the battle between this
hero and heroine(Logan & Scottie) was the perfect foreplay with the perfect background in their developing romance.

It starts...
"Scottie Giardi took over when Seve Delgado went into witness protection, during Santerra's Sin. Now as head of the secret government task force known as the Dirty Dozen she rarely works in the field. However, on Christmas Eve she receives a very mysterious phone call from Seve warning her one of her operatives, Lucas Blackstone, is in danger. Apparently, the danger comes in the form of an identical twin brother, Logan Blackstone. Scottie's mission is to contain Logan, by any means necessary,...until Lucas completes his mission."

The characters are all well developed that will keep you truly entertained only to get a good conclusion to the series.  I found "Dark Knight" a good novel that I would recommend as a good read.