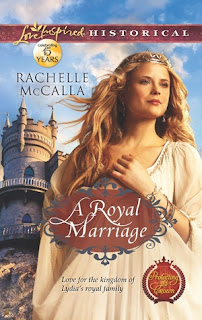 "Royal Marriage" by Rachelle McCalla..Protecting the Crown Book # 1 setting from Castlehead, Lydia...  was a good read with plenty of 'action, drama, romance and spies' that would take you  to that 'magical time in history of Kings, Princesses, castles and knights in battles.

How does this story start.....

The novel will definitely draw you into this story of "Princess Gisela  would honor the wishes of her father and that was to marry an Illyrian even though  her heart tells her something different.  On her way to be betrothed and she is injured and near death. If she dies war could break out. They stop in Lydia as King John is known to be a healer. Gisela struggles between the feelings
she has towards King John and knowing she is promised to Prince Warrick and that much in the political realm depends upon their union. Illyrian’s had killed King John’s father four years ago and now he must surrender this beautiful princess to those violent men as well. After his wife’s  death three years earlier, John had sworn never to love again or chance losing a woman while trying for an heir."  Has God sent Gisela into his life to shown him that he can love again?
It was a beautiful moment when you could see how King John's heart was so wounded yet he holds to his 'strong faith in God. "Royal Marriage" was a beautiful told story of a 'Historical Romance.'   And this is where I will say you must pick up "Royal Marriage" to see how this will all come out. Be ready for a great suspense, fantastic historical  and enjoyable read.  Would I recommend?  Yes!  You will definitely be left only wanting  the next series...book # 2 Defending the Duchess (Love Inspired Suspense).